The state of contemporary art: from popular culture to mainstream history

In order to challenge the artistic status quo, one can simply take a urinal and name it Fountain, exhibit it in a museum and leave it to the critics to judge. Marcel Duchamp’s works are a good example of “idiosyncratic” art, which created outrage in the early days, but still managed to enter the history of art as the turning point of an entire perspective on creation and perception. The work of art travels, from its origins to the moment it faces the audience, and becomes classified as a product of either popular or high culture. But contemporary art has the unprecedented advantage of being synchronized with the social reality, escaping the formalism of traditional academics, while the artistic movements developing in past time periods (such as Impressionism or Expressionism) faced serious repudiation. 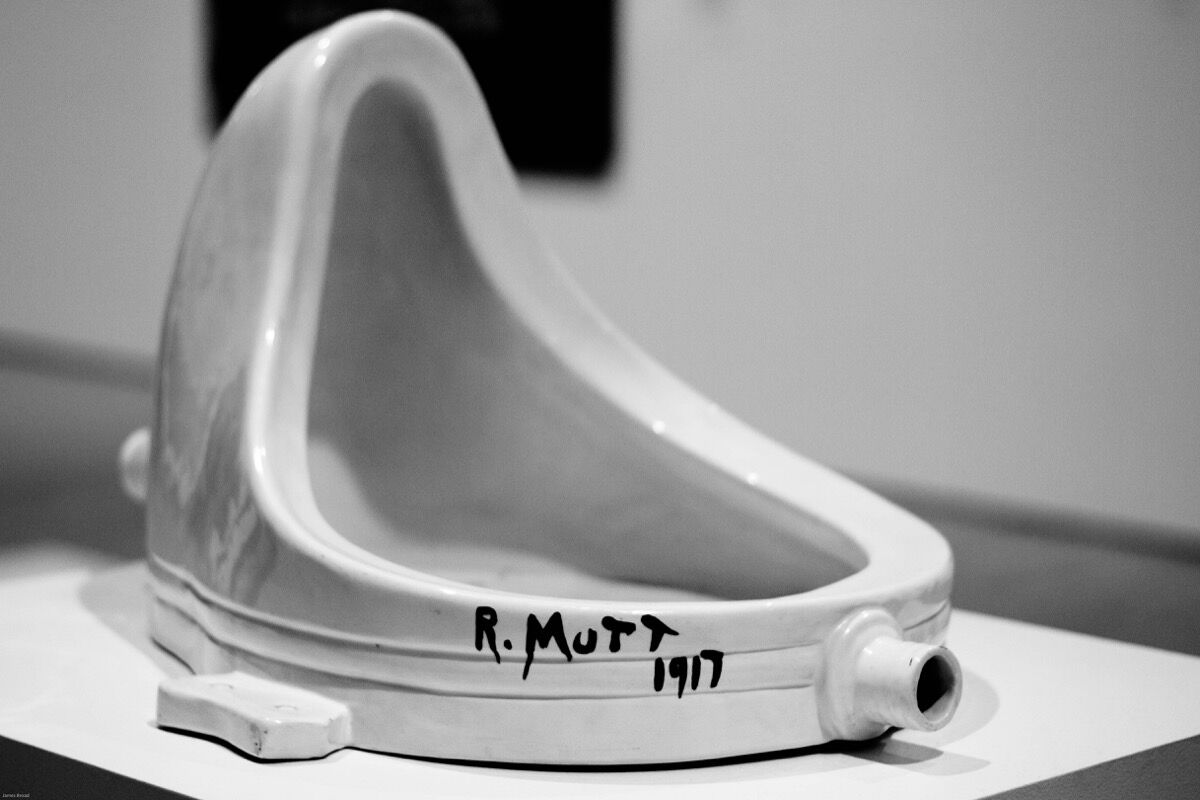 However, to what extent can we speak about a “contemporary” way of producing art and which are the characteristics defining such a work? These could be the main dilemmas that determined critics to conclude that the art of our times is heterogeneous and therefore cannot be included into a mainstream category. Still, contemporary art as term derives its meaning from the concept of synchronicity, because it suggests actuality, something that lives and happens before your own eyes.

For many centuries, art supposed to be inaccessible and reserved to the elites, commissioned by state institutions or prosperous families, in order to preserve their status. Fine art and its institutions continued to function as sources of social identification and differentiation, based on the complex mechanism defined by Bourdieu and Passeron in 1977 as the cultural capital. Originally meant to explain the differences among the levels of performance and academic achievements of school children within France’s educational system, it has been preoccupying Bourdieu throughout his entire career and was further developed in two other writings. In “The Forms of Capital” (1985), he defines three interrelated categories: economic, social and cultural capital, the latter referring to “a person’s education that provides advantage in achieving a higher social-status in society” (p. 56). Inside this definition, I seize a nuance attached to the symbolic quality of culture that is able to empower someone or bring down social barriers. In this view, I consider that the distinction between high and popular culture is dissipated once the social classes disappear or are ignored. This was the case of many socialist societies but not only, where although the traditional hierarchy had changed, people were still in need of cultural benchmarks.

Once art production became less controlled, starting with the Impressionist painters who took their easels out in the plain air, the shift between different perceptions grew even more and more acute. Their work was considered unfinished and bad, meant to please the eye of a non-connoisseur and lacking serious themes such as les grand histoires. The pastel landscapes with their curly sidelines and dissipated colors were in fact the first examples of a new perspective, which transferred the emphasis from expression to impression.

The problems of the new world, which mainly concerned industrialization and liberation from classical canons, were in the center of modernist inspiration. Because they wanted pure and free art, modernists sought to evade any kind of political affiliation, although they internalized information and judged it progressively. In this view, the modernist works of art posses an intrinsic value, emanating the anguish of someone who has been living during an impossible period of transition. This can be both a distinction and a resemblance of the two categories, “the art of that century” (i.e. the 20th century) and the “contemporary art”, in terms of intrinsic value. The outbreak of the First World War constituted the fundamental experience for a whole series of creators, although it suspended the cultural movement for a serious amount of time. Historian Peter Gay (2008) believes that “this catastrophe has polished the modern age”, as in this exceptional situation, the artists were faced with an unpredictable reality and sent off to war. The epitome did not cease to occur nonetheless and, in the interwar period, the directions of manifestation of art really caught a new shape. Either in prose, poetry or fine arts, there was some degree of anxiety, depression and doubt in everything. Moral and material sufferings and losses have thus led to a new perspective: investigation of the human affect was, from then on, an essential condition of art.

Marcel Duchamp’s ready-made moment was distinctive for the new way of perceiving art, as he aimed to change the conception according to which the material or the formal aspect is at the core of an artwork. He wanted to place the idea instead, as the measure of all things, while developing the thesis according to which, “in essence, everything could be art, as long as the artist says so” (Gompertz, 2012, p. 25). However, the ready-made offers the spectator an immense responsibility, that of deciding if what is brought before him represents art or just a simple bicycle wheel standing upwards on a stool. He wanted to “give the one that regards a work of art as much importance as to the one who made it” (Duchamp, 1995 cited by Millet, 2017, p. 40). In the end, he wanted to challenge the conception of artistic taste and prove that art, as beauty, is in the eye of the beholder. This democratization of art turned the perception upside down and once the high and low culture have interpenetrated, “the tight classificatory schemes attending to each have given way to blurred cultural categories, replacing the self-reproducing logic of distinction with a flatter and more open universe of cultural declassification” (Prior, 2005, p. 124).

Later on, in the late 1970’s, the Centre Georges-Pompidou in Paris assembled a retrospective dedicated to Marcel Duchamp and placed a reproduction of the Fountain in the center of it. It is important to point out that the original work, that from 1917, was lost shortly after it was refused at the Independents’ Salon in New York and Duchamp signed a series of more urinals, which are now exhibited all over the world. With this amend, the case of “art being the idea and not the object” reinforces as one that influenced many artistic movements that blossomed after, such as Dadaism, Surrealism, Abstract Expressionism, the pop art and the conceptual art.

When Ernst Gombrich first published his art encyclopedia, Histoire de l’art, in 1950, he considered that people were completely hostile to the revolutionary ideas of the 20th century’s art. However, sixteen years later, he believed that “the modern art had finally prevailed” (Gombrich, 2006, p. 12) and it was closer and more synchronized to the society than never before. In consequence, beginning with the late 1960’s, we can talk about a real “contemporary” art, while those who watched the street as a painting, those who rent the divas from the sunscreen commercials or those who use ripped posters in their work were the true “contemporary” artists. (Restany, 1968 cited by Millet, 2017, p. 24) The art center shifted to New York, where the new pop art, influenced by popular culture and almost inseparable of it, contributed to the art democratization. The raising of the living standard and the educational progress of the middle classes turned the art scene into a masquerade of innovation, color and ordinary materials. Andy Warhol considered supermarkets some kind of museums and believed that pop art is impossible to define. “Pop art is for everyone”, he said, “I don’t believe that art should be reserved to an elite, I think it should belong to the American masses that accepts it anyway” (1989 cited by Millet, 2017, p. 29). Art critic Lawrence Alloway, the one who invented the concept of pop art, stated that “the new role of fine arts is to represent one of the many communication forms within a system in expansion, which includes also the mass art” (2004 cited by Millet, 2017, p. 29).

The “cultural omnivore” and postmodern approaches

One of the many critics brought to Pierre Bourdieu’s approach was that his study focused mainly on products of “high” culture, while the “popular” or “mass” culture is variably regarded. Nick Prior believes that his characterization “only serves to reproduce inequalities”, while the absence of references to pop art, multi-media art or popular literature degrades his analyses. Moreover, he sustains that nowadays we need to consider the accentuated modernity, which is maximized and where “the cultural forms are more mobile, institutions more permeable, and where embodied inequalities of gender, class and ethnicity are relatively durable but also frequently reconstructed” (Prior, 2005, p. 135). All these changes have created the “cultural omnivore” (Peterson & Kern, 1996, p. 900), an individual that consumes both high and popular culture, in the terms announced by John Storey.

In the midst of postmodern society, we have access to various products of culture and our perception is not a closed system anymore (if it has ever been). The cultural capital is no longer a stable currency, as its “value can only be extracted from a postmodern culture of instant obsolesce through strategies of strolling, vagabondage and purposeless travel” (Prior, 2005, p. 133). In other words, the concept of high culture, associated to the highbrow taste, looses its intensity and gains a pejorative meaning. In 1996, Peterson and Kern conducted a study on the American society, which was aiming to prove that there has been a shift between the high culture and what they have called “omnivorousness”. During results analysis, they identified five factors responsible of this switch of perception: the structural change, namely the rising levels of living, the social class mobility, the access to art through media and a broader education introducing the elite aesthetic taste to the masses, the value change, more striking after the Second World War when being an “exclusionist snob” was associated with racism so everybody wanted to become an “inclusionist omnivore”, part of the historical trend of tolerating those who had different values, the art-world change, implying that art professionals started to ignore traditional institutions and proposed avant-guardist theories which praised novelty and more exotic ways of expression, the generational politics, defined by the “Woodstock Nation”, who saw the popular culture more like a viable alternative to established elite culture and valorised inclusion, and status-group politics, that showed how the perspective over popular culture changed, from subordinated to a specific group to accepted and incorporated into the dominant status-group culture. Moreover, they suggest that nowadays the category most predisposed to adhere to “omnivorousness” is the new business-administrative class, which has both the means and the education to estimate and sustain the new modes of expression. (1996, Peterson & Kern, pp. 905-906)

Popular culture has been encountering a series of inner alterations in the past decades, as there is no clear distinction between highbrow aesthetics and mass culture anymore. Of course, whether we choose to lean more on John Storey’s first definition, popular culture is what makes people react in different ways and in great numbers, hence its popularity and heterogeneousness. After all, the postmodern society prevailed with a strange hierarchy according to which, as Andy Warhol said, “it’s not what you are that counts, it’s what they think you are”. Therefore, the mixed aesthetics that characterizes our world, influenced by all the changes in the social environment, both structural and functional, have created a new kind of spectator, one that is able to judge the art by outrunning the first level of interpretation. Besides, the arts’ function is no other than facing us with the meanings of life, in all its aspects, from actions, reactions and consequences, while the history of art teaches us about humanity, divinity, crimes, political power, propaganda and love, femininity, race and social classes. For this reason, it is our responsibility to support all kind of artistic creations, so we don’t lose one of the essential coordinates that contributes to our inner equilibrium – the confrontation. And finally, let’s not forget about the catharsis effect, because if we were to listen to what Picasso said, “the purpose of art is to wipe out the dust of everyday life”.